Last Friday I went to see the premiere of the new Alice in Wonderland ballet at the Finnish National Opera. This is one of my all time favourite books and to say that my expecations were high is an understatement.

Nevertheless, I have to admit  – it was amazing. 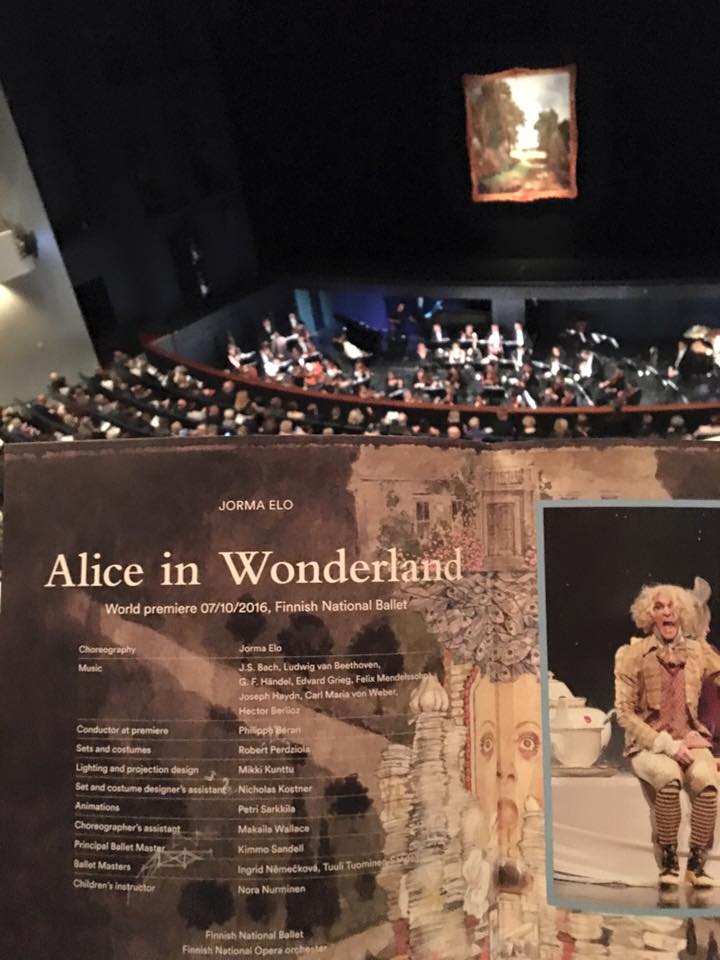 For someone who knows the book by heart and adores its creativity and magic, the level of detail put into the development of characters’ choreography and the visual aspects of the ballet was more than satisfying. Let me tell you all.

First of all, the costumes and the scenery! This is not just a visually pleasing, beautiful production. The costumes are so attractive and well made, that the viewer is caught anticipating what the next upcoming character will look like. And there the ballet does not disappoint. The striped long socks of Tweedledum and Tweedledee, the adorable rabbit’s and mice ears, the majestic outfit of the Queen of Hearts, the modern and geometric outfits of the chess piece characters, not to mention the pearls on the Caterpillars dress… 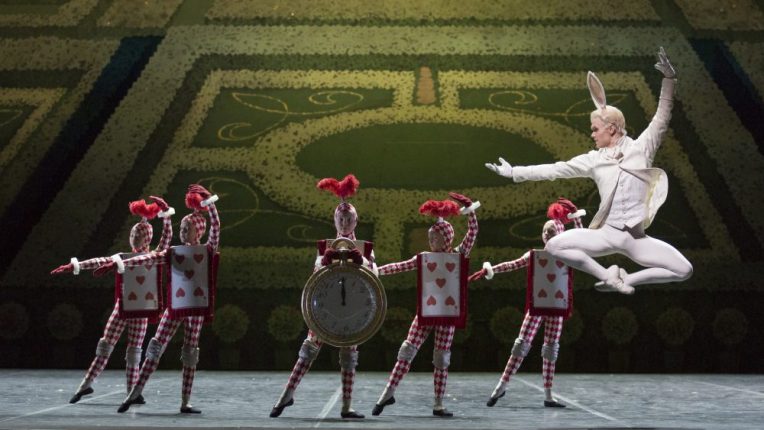 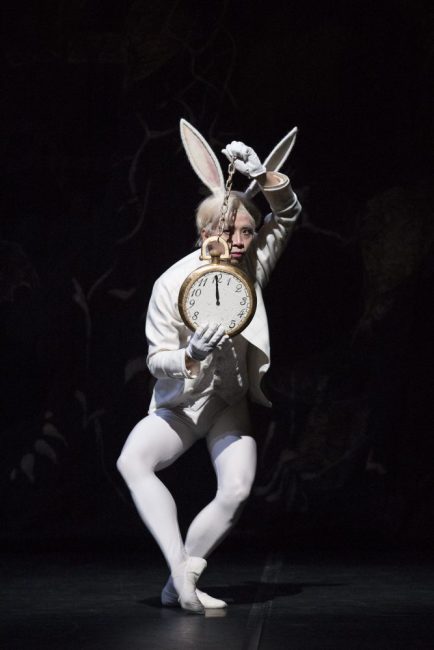 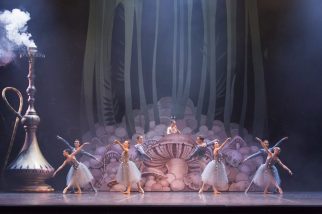 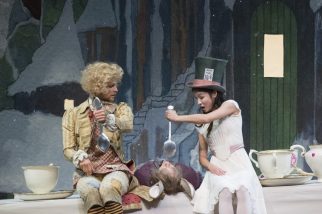 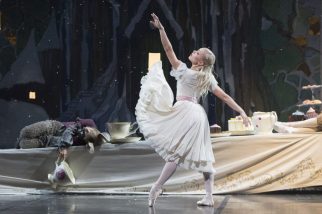 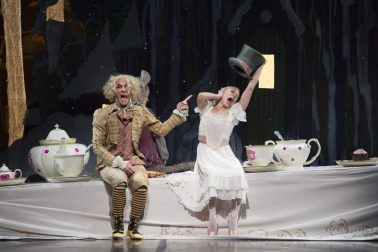 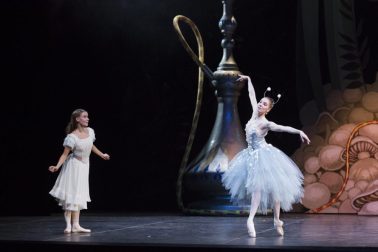 You will find all the graphic elements that are supposed to be here: the stripes, the checkered material, the harlequin black and white pattern, the symbols of the card suits – hearts and spades, the red contrasting the white… Everything!

The tea china set at the Mad Hatter’s tea party with huge cups and saucers makes you want to actually attend the tea party. There is a cute mouse who had just a bit too much to drink and it gets fed sugar from a huge spoon (see pic above). The small details like this make the spectacle  entertaining equally for both – children and adults.

Secondly, what I enjoyed very much are various creative solutions. Choreographer Jorma Elo has done a tremendous work to translate the characteristics of various characters into movement. For instance, how do you show to the viewer the oddness / quirkiness of Tweedledum and Tweedledee? By incorporating elements of modern dance into the choreography of their part. It was brilliant! Their sharp, abrupt movements, with almost geometric trajectories as opposed to traditional ballet flexible, soft and flowy movements create a level of contrast, just like their odd dialogue does in literature. (By the way, they do have a battle over a medal!) Also, pay attention how the underwater creatures creatively “swim” in their dance or the flamingo cricket.

Music! Well, actually the lack of it. When Alice plays and enjoys life and is in her fantasy world the air is filled with masterpieces of Mendelssohn, Grieg, von Weber, Händel…But to handle death, uneasiness, hardship and uncomfort the creators have turned to silence. Talk about an awkward silence! And then you sit there, looking at the characters on stage wishing the music would start playing again. Now that, is what you call – engagement! Very well-done! This ballet is as creative as it should be.

Alice in Wonderland ballet is a celebration of creativity! All the details of the production from the choreography choices to the costume design do the right justice to one of the most creative fairy tales of all times. You will not be disappointed.

There were so many things to like about this ballet. And so many to notice! In fact, I am sure there were few things left unnoticed. It is not often that I would want to see a ballet for a second time.

If I had to force myself find at least one negative thing, it is of course the absence of the character for Cheshire Cat. The cat is present, but in an abstract way as a two-dimensional image re-appearing on stage. Despite being slightly disappointed about this fact, however, I do understand the reasoning behind this choice as it raises the character above the rest. Mr. Jorma Elo, choreographer in his recent interview said that because this character is “so very different from all other characters”, the only solution he could come up with is that it will not be a character like other dancers (View the interview here, it is in Finnish though: http://areena.yle.fi/1-3736104)

Finally, for someone who lives and breathes illustration, the visuals for this production are a dream come true. I am so pleased for the choice of illustration over photography. Illustration at times I feel is a very under-rated form of art.

The poster and website do not use photography but illustration: 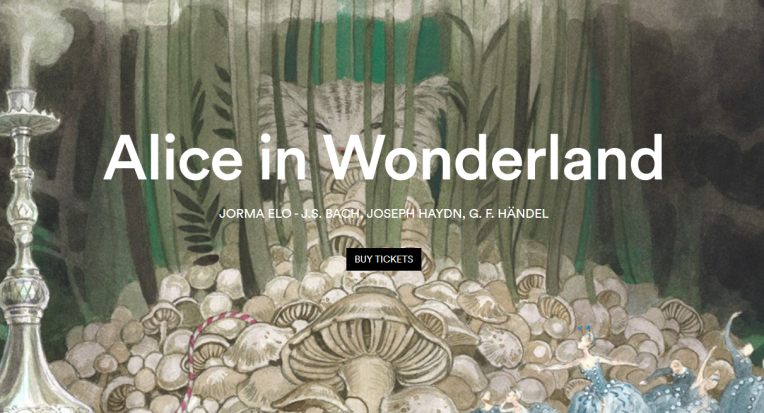 The costume designs are illustrated by Robert Perdziola 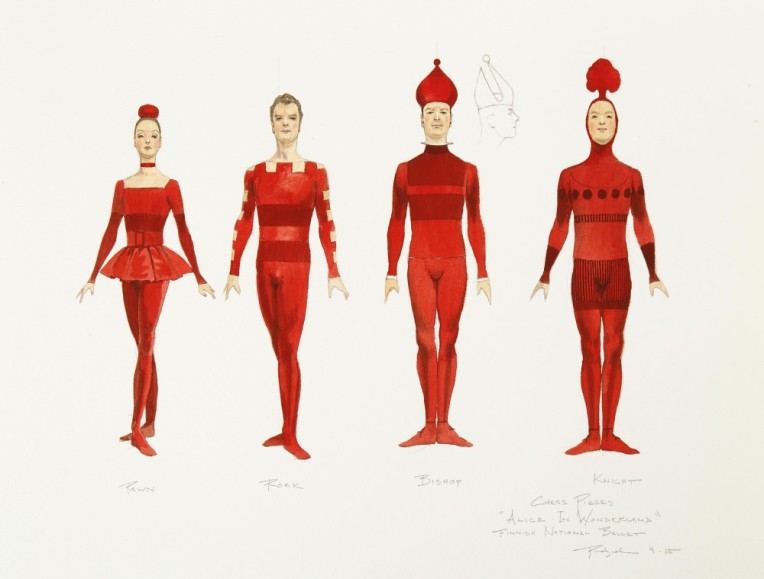 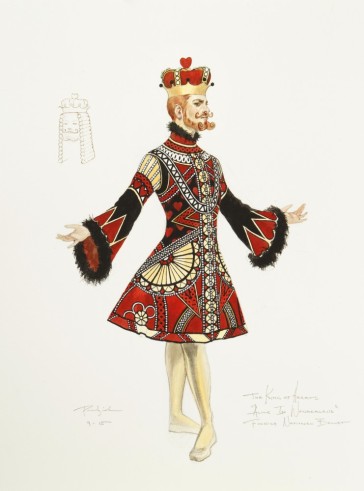 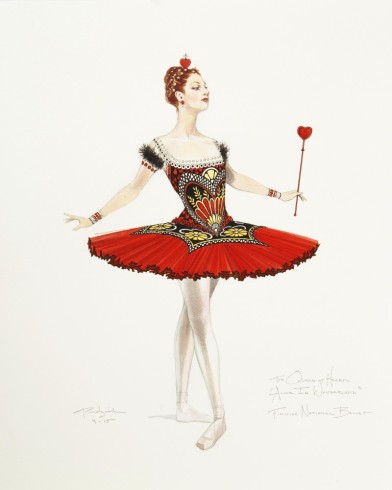 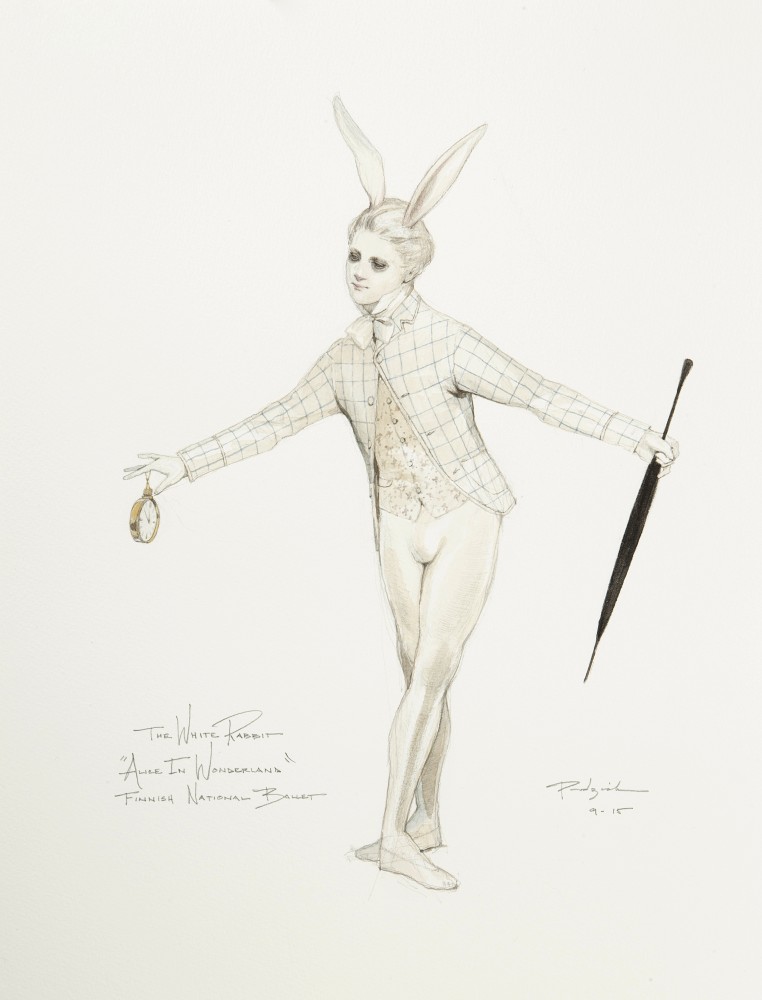 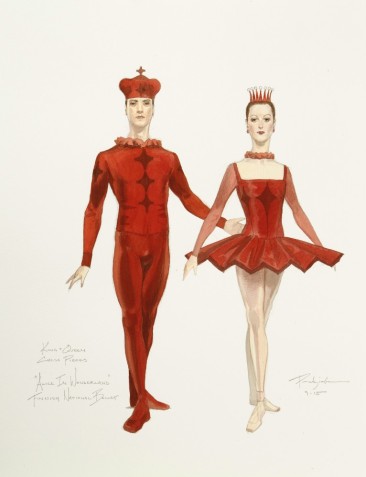 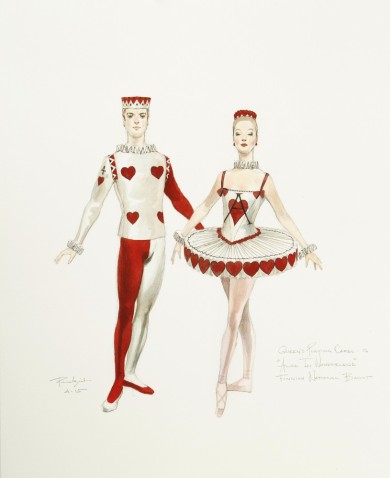 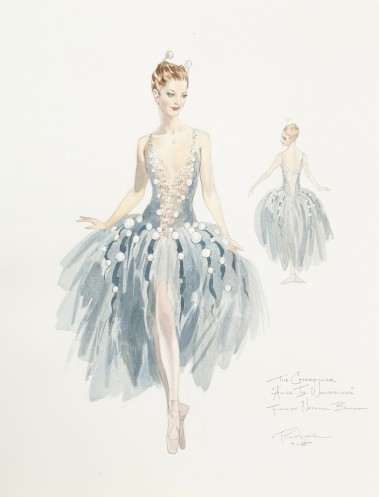 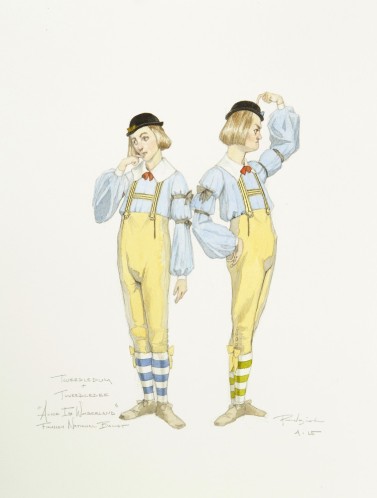 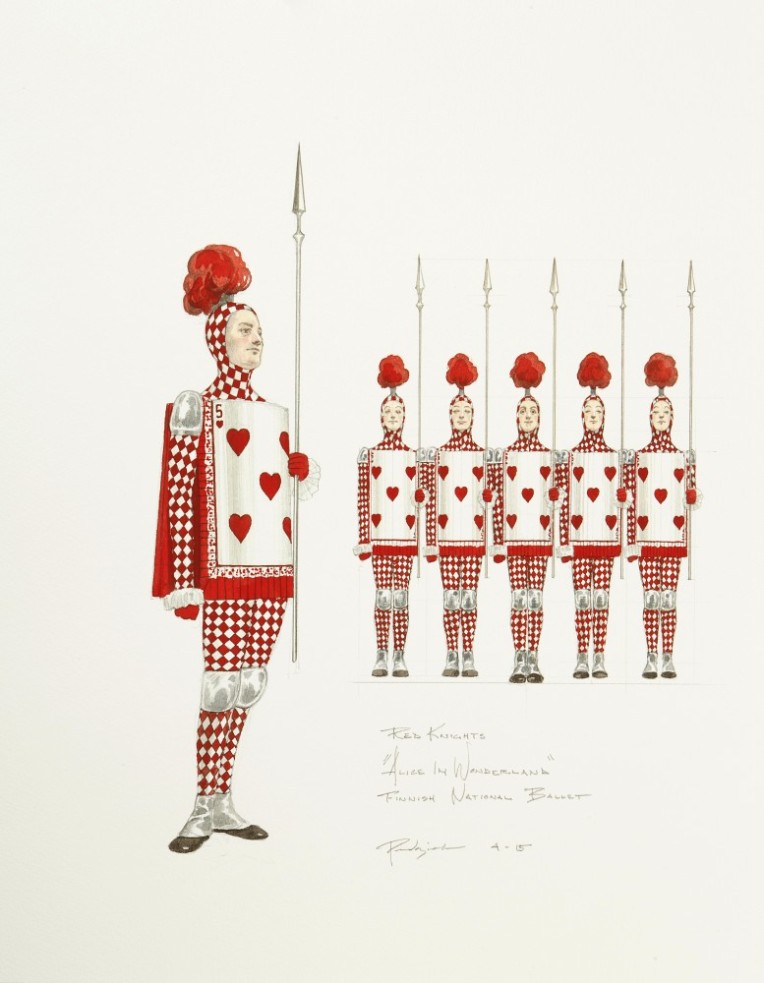 And if that is not enough! They have a notebook for sale at the Opera, with the illustrations! It is only 15 € – but look how gorgeous this really is:

Dreaming! Now this fairy-tale has got me really dreaming about possible future illustraion projects, too. And yes, if I manage to get a ticket still, I would love to go see the ballet again! And so should you.

Fashion Illustrator based in Helsinki. 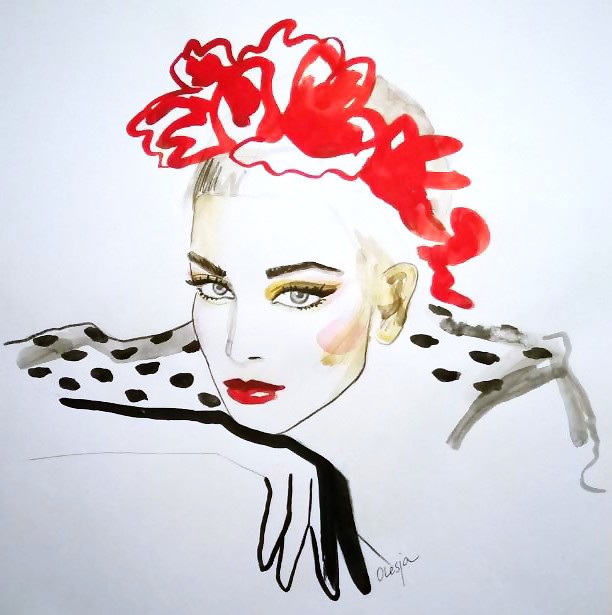 Be the first of your friends to LIKE it

Be the first of your friends to LIKE it